The security industry is forever adapting, evolving, and changing. This means that we have to do the same or risk being left behind, but with so many terms and types, it can be easy to get lost.

Wiegand is a word you will hear a lot in the access control space, it is one of the types of systems that built the industry into what it is today. We will take a look at how it started and how it is used now.

This short guide will help you understand Wiegand Access Control, how it works, its uses, benefits, and who can utilise a Wiegand system.

If you have been in the security industry a while you may have stumbled across the term Wiegand, which was highly popularised in the 80s and was the standard for card readers.

Although the name may sound a little tricky to understand the system is fairly simple to explain. The term gets its name from John Wiegand, a German engineer.

Wiegand came across a phenomenon he would later name the Wiegand Effect, where a small wire would produce magnetic fields. This wire would be used in plastic cards in a certain pattern that could be decrypted by a reader.

Although the technology does not exist in the same way it started out, it is used in a lot of different access control systems we use today. You will find Wiegand technology in everything from biometrics to cards, to other forms of data capture and security.

The most common application of Wiegand technology is in access control systems. Due to the design of the devices, they will only work with Wiegand sensors, which makes them much more secure.

Luckily, a wide range of reader manufactures products work with Wiegand technology, so it will not restrict you. 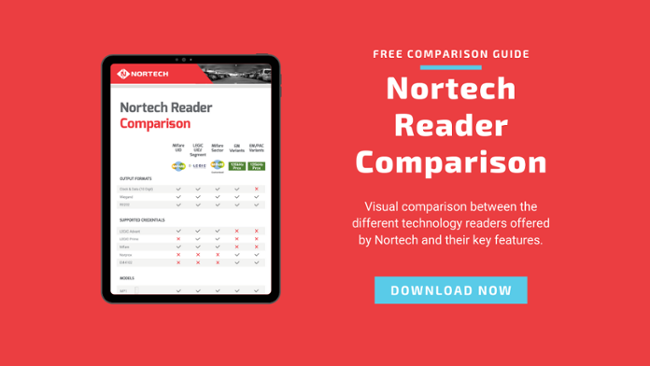 The term ‘Wiegand’ can be used for a few different things within the access control sphere and can cause some confusion if you are not well versed in the technology.

Let us break down some of the phrases and areas it comes into play.

Card Format - the way a card is set-up, this is determined by programming a compatible pattern with the access control panel. This ensures they can talk to each other, and the card can unlock the door.

Credential - in access control, this is what you use to access a door or lock. For instance, this could be an ID card that opens a door or your fingerprint that opens your phone.

Reader Protocol - how the reader is designed to decode the data presented by a card.

Reader-Controller Hardware Interface - simply put, this is how the two halves of the security system talk to each other, the actual hardware to link the two.

Reader - the part of the system that decrypts the data it is getting and opens the lock, this will read the credential and grant or deny access.

Recognised as an Industry Standard - a far cry from how it started, the technology has evolved but the core system principles are the same. Therefore you will find Wiegand technology in a lot of modern access control systems.

End-to-End Encryption - ensuring you pick a reader that is more secure and covers you from tampering or hacking, look for an end-to-end encryption option. Not all Wiegand systems will have this technology, so keep an eye out when searching or buying.

Technology is Fairly Universal - due to the vast uses of Wiegand systems in access control, the technology works with a lot of different manufacturers' products.

Works with Different Data - Wiegand systems can hold all sorts of different data, but can always be converted back into the basic information. The information is decoded by the reader which is used to access a door or lock.

Compatible with Most Systems - due to being a form of wired proximity readers, systems that use Wiegand Protocol work with a range of access control systems.

Although some may consider Wiegand sensors to be the starting point, Wiegand keycards were where the impact was really felt. These keycards were used for security doors.

The plastic keycards have various Wiegand Wires embedded in them, which effectively make patterns, call it similar to binary.

These patterns are then analysed by the reader when the card is swiped, with an area including wire indicating a 1 and an area without being a 0. The combination of 1s and 0s creates a unique digital code that will determine if the door is opened or not.

Due to the digital code being embedded in the cards using the Wiegand Wire, the cards are much harder to replicate or counterfeit as opposed to a stripe (payment) card or barcode.

In addition, the Wiegand style cards are not affected by magnetic fields and can not be reprogrammed as a payment card can.

This is the basis of Wiegand access control, but the industry has mostly shifted away from this traditional method. With this being said, however, a wide range of industries and security systems utilise Wiegand interfaces.

We have already alluded to some of the ways that a Wiegand Access Control system can be utilised to impact your security, this section will act as a summary of these benefits. We will go into detail on each of these different benefits to help contextualise them.

Cannot Be Replicated - Wiegand technology is uniquely designed and scanned by the readers, which means it is difficult to replicate. Because the technology is embedded in the cards you cannot duplicate them like a normal stripe card or other cards. So cards can be cloned and are more secure.

Unaffected by Magnetic Fields - some types of cards are susceptible to being altered by magnetic fields, which allows people to wipe or reprogramme them. We see this used a lot in identity theft and fraud.

Criminals are Less Familiar - as alluded to in the previous points, this technology is more complex and thus harder for criminals to access and alter. Using a system like Wiegand allows you to be less affected by crime and less likely to incur internal theft or loss.

Works Well With Others - Wiegand systems are among the industry standard, so are widely supported and used by a lot of manufacturers. This means with the correct research, you will not encounter any issues.

Wide Range of Use - although the technology has changed from how it started out, Wiegand systems are commonly used in the industry. This results in systems that are easy to use in a range of situations and transmitting or holding different types of data.

Magnetic Locks - Wiegand Sensors rely on magnets to function, unlike other systems they do not require external current or voltage to function. Using magnets means the system is much less reliant on external factors and thus can have additional uses.

Wiegand has been a part of access control since the 80s and has its fingerprints all over the modern technology we use today.

With this being said, there is a wide use for access control systems that have Wiegand elements to them, here are a few examples.

You would struggle to find an industry that has not used Wiegand in some way, shape or form in its access control since the 80s and this is one of its biggest strengths.

Hopefully, you now have a broad overview of Wiegand, how it is used, who uses it, and some of its benefits in access control.

Why Should You Trust Us?

In this guide, we will be diving into the world of access control for offices and learning how these systems can affect and impact a workplace setting and create a more secure working environment for everyone.

In most peoples’ minds, a warehouse is often a dusty room full of boxes, pallets and mice, that is patrolled by one security guard a few days away from retiring. This is an outdated stereotype and a

When it comes to workplace security we all have a different picture that comes to mind, maybe it's the security guard you greet every morning at the front gate, CCTV cameras in the car park, the

The last time you went to the gym or fitness centre you may not have thought that it looked much different than the last few decades.